All car bays in a proposed block of flats in Subi Centro could have charging points for electric vehicles, project owners say.

A development application from Subiaco-based Hillam Architects for 25 apartments and a ground-floor cafe in a five-storey building at 6 Carter Lane is out for public comment until May 17.

Hillam is asking for a variation on the Metropolitan Redevelopment Authority’s design guidelines height limit of three storeys for the area.

The development application states Subiaco railway station “is only 350m away” but proposes to have a total of 38 parking bays at ground and basement level. It says also that the number of electric cars worldwide grew to three million between 125 million and 220 million by 2030.

“the proposed development intends to support the update of low-emission and electric vehicles,” the application states.

“A number of car parking spots are planned to be dedicated to electric vehicles, while the electric charging infrastructure is likely to be provided for all car parking bays.”

Last month, Australian Labor Party leader Bill Shorten – who was in Perth this week to campaign for the May 18 federal election – controversially announced a target of 50% of all new vehicles being electric by 2030. 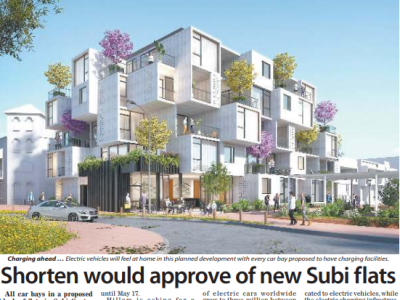