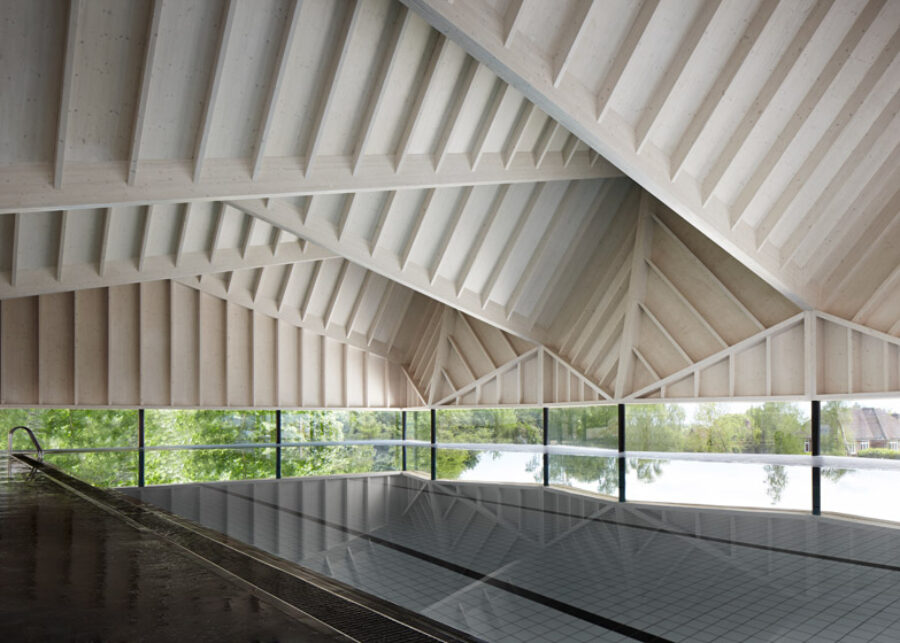 20th century architectural construction systems have largely been defined by two materials, concrete and steel, beginning with the 1890 Rand McNally Building in Chicago (steel) and the 1903 The Ingalls Building in Cincinnati, Ohio (concrete). The ubiquity of these materials for larger scale structural constructions globally is undisputed, however since the 1990s there have been significant developments furthering the potentials of an alternative material contender, timber.

Glued laminated timber (GLT), where smaller timber pieces are glued in one direction to increase member sizes and structural strength had been used since the late 1800s whilst laminated veneer lumber (LVL), where veneer layers are bonded under heat and pressure, were developed in the 1970s, both offering significant improvements in structural performances and crucially, predictability compared to traditional sawn timber.

A real milestone emerged in the 1990s as the German and Austrian paper industries, seeking alternative routes to market in the face of declining demand for paper products, developed Cross Laminated Timber (CLT). A superscale plywood using timber planks arranged in perpendicular layers, CLT is only limited in size by transportation to site. CLT was put firmly on the map when its capabilities were pushed by Waugh Thistleton Architects and Techniker engineers in 2009, utilising it for a nine storey residential tower, Murray Grove in London. Previously CLT was typically used for 2-3 storey structures. Constructed entirely from pre-fabricated solid timber, load bearing walls, floor slabs, stairs and lift cores. Astonishingly the structure was built in 27 days by 4 men, without a tower crane, to 2mm construction tolerances and with 1150t of CO2 safeguarded, locked in the timber used for the structure. 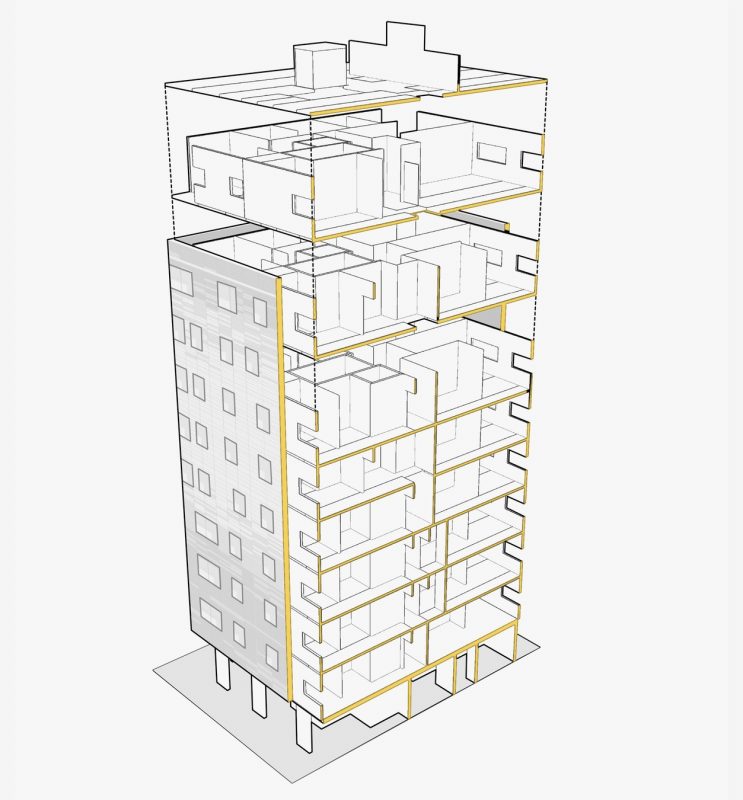 This last point may well prove to be an increasingly important factor in driving an increasing uptake of timber construction at larger scales. With 25% of greenhouse gas emissions produced by the construction, operation and maintenance of buildings in Australia there is significant opportunities alongside reducing ongoing operational energy requirements to address material choices to drive down this figure. Cement is the source of around 8% of the world’s carbon dioxide (CO2) emissions, whilst the steel sector is responsible for around 9% of global greenhouse gas emissions through extraction and energy intensive production processes. To put the scale of this in context, combining both sectors, they equate to near double the total of CO2 output from all 28 European Union nations. Currently these external consequences are not priced into these ubiquitous materials but with rising energy prices and more forward thinking governments poised to implementing measures to tax heavy polluting sectors and incentivise cleaner alternatives this may well not be the future status quo. Timber construction has the opposite effect with vastly reduced harvesting and production energy requirements with trees, particularly younger CO2 hungry trees from sustainably managed forests acting as carbon sinks, sequestering carbon dioxide at the rate of one tonne per cubic metre of wood, itself a replenishable material. As an example, the 10 storey Forte apartment building in Melbourne is estimated to have stored 761 tonnes of carbon dioxide whereas a concrete equivalent would have emitted 1451 tonnes in C02 emissions.

Advances in manufactured timber products have improved structural capabilities, whilst taking advantage of the characteristics of timber, its inherent strength to weight ratios are 20% higher than steel and 4 to 5 times higher than non-reinforced concrete, whilst softwoods typically used in modern multi-storey timber construction have 20% of the density of concrete with positive implications for foundation sizes and structural loads. 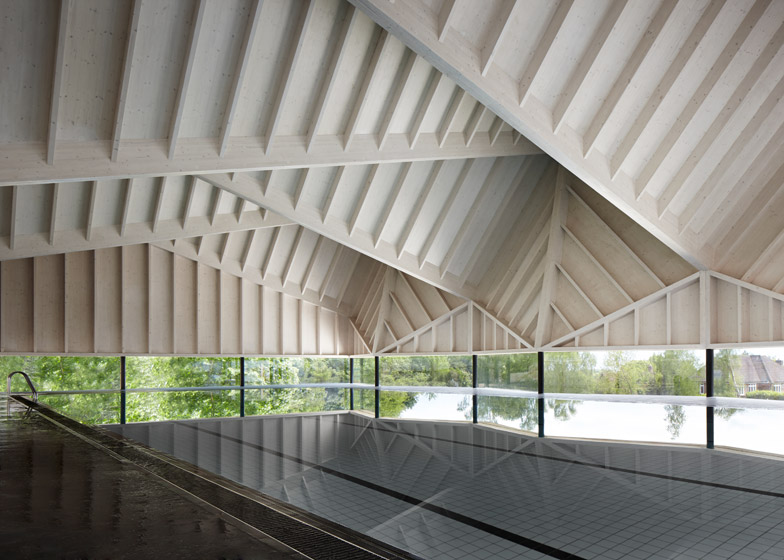 Australia and more so Western Australia has been relatively slow to the uptake of engineered timber in larger building developments, with only a dozen or so realised buildings such as 25 King by Bates Smart, a 52-metre-tall office tower made of engineered timber, though more are in the pipeline. This is no doubt exacerbated by the large geographic size of Australia and distance from production facilities (mainly European), however two new production plants on the East coast and some important changes within the 2019 National Construction Code (NCC) should hopefully increase its utilisation. Instead of costly ‘performance solutions’ to gain building approval there are now Deemed-to-Satisfy alternatives for timber structures with an increase in permissible height up to 25m  in which fire-protected timber construction systems can be used. Furthermore building classes have been broadened to include schools, retail premises, hospitals and aged care facilities adding to the previously approved multi-residential, hospitality accommodation and office buildings. There are promising signs locally with DeHavilland, a 4 story, mixed use timber development under construction in Midland, WA.

A change in mindset is required both from consumers, specifiers and builders to move away from tried and tested options such as concrete, steel and masonry to drive demand for timber alternatives taking advantage of the unique opportunities it offers for prefabrication, with the potential for mass customisation much like offerings of car manufacturers. Ultimately production is controlled by sophisticated CNC machines, change the digital input file and so the output changes without affecting manufacturing processes. As demand increases this will drive supply chains and increase local expertise hopefully creating a positive cost reduction feedback loop. Meanwhile timber based innovations continue with promising experimentation with new production techniques such as post tensioned timber and hybrid composites using hardwoods, Kevlar and carbon fibre to further extend capabilities and increase applications.

As the Nikken Sekkei’s W350 tower proposal, a colossal 350m, 70 storey mixed use development in Tokyo demonstrates (nearly 50 metres taller than the Shard in London), combining timber (90% of the construction material) and steel, it seems the potential of timber, dubbed the ‘new concrete’, knows few limits. 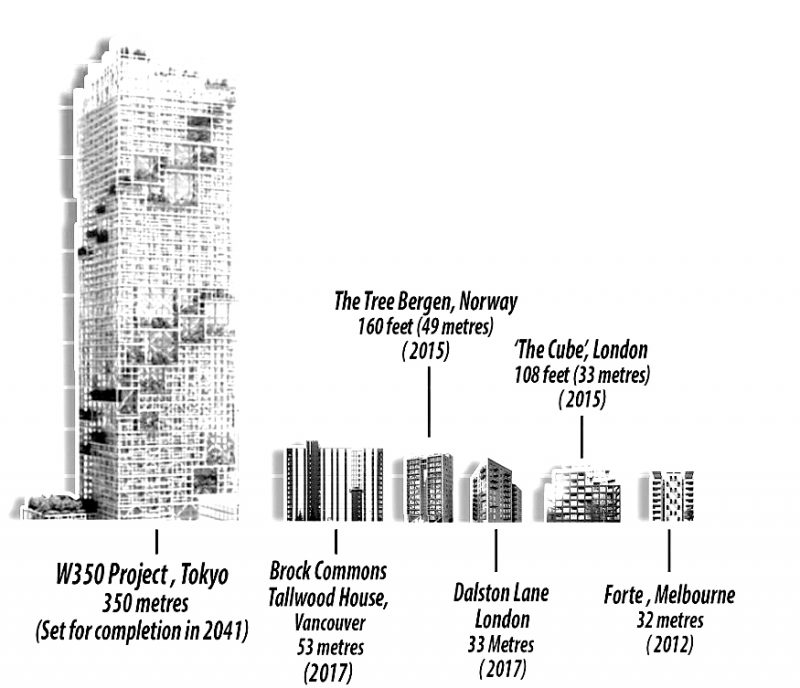