The architect behind the Iconic Scarborough twin towers and Edge Visonary Living’s Botanical in Subiaco is working on a niche, heavily design-oriented project in Carter Lane, Subiaco.

Mr Hillam said the project would also have a strong botanical-green theme but was trialling architectural and design features that would likely make it “less commercial” than many multi-dwelling projects. He is also making a “contribution to the medium density debate in the local market”.

The $2.3 million sale of the site, on an extended settlement, was negotiated by Colliers International’s Tory Packer in a 2017 sale campaign.

“This corner site, one of the two big residential lots in the Carter Lane precinct, attracted interest from local and international developers wanting to be part of a key infill project in Subiaco,” Ms Packer said.

Yesterday, Mr Hillam said the design was in its infancy and the architects were working with the Metropolitan Redevelopment Authority’s design review panel on finalising the design.

The project, which he hoped would ultimately house some Hillam employees, was expected to include 24 bespoke apartments and a commercial tenancy, he said. Future owners will have a substantial input into the features of each apartment.

“No two apartments will be the same,” he said. “There will be strong sustainability themes, relatively high-end, but slightly less commercial. It won’t be cheap but it’s not designed for the (traditional) level of profit.”

The City of Subiaco is likely to assess the plan when it is ready for development approval.

For all inquiries about this upcoming project please contact; 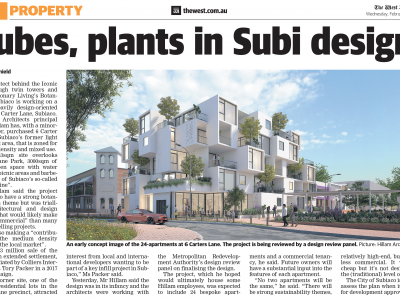